This article outlines how to set up a clock in your music scheduler for Takeover. A Tether license (or a legacy LDR1, #engage, or Takeover license) is required to make Takeover actually function in your automation system. These instructions will also work for a Takeover Countdown feature.

You'll set up the following elements (see the table under each element for details on your automation system):

In most cases, you'll want to create these elements before building your clocks. If you're using WideOrbit with MusicMaster, it'll be easier to create the elements directly on the clocks themselves.

If you use GSelector, your commands can be created either as Breaknotes (under Clocks) or as Links (under Linker). If you see fields configured under Interface > Export > Schedule > Breaknote, then you can use Breaknotes for your Tether commands. Otherwise, you must use Linker.

If you don't see your automation system or music scheduler listed, Futuri VIP Support can help you to determine how to add these elements.

The Begin Song Replacement is the command that turns on Takeover.

The End Song Replacement is the command that turns off Takeover.

Empty Song Slots are placed in the log where you want Takeover to insert songs.

The "Start Voting" command is required only for OpX stations, to tell the automation system to start fetching winners for Takeover.

When building Tether clocks, we recommend making copies of existing clocks first (from the same position in your assignment grid) and then modifying those copies. You'll likely have three different clocks for Takeover:

The hour before Takeover starts

To build a Takeover clock, you'll place your Begin Song Replacement in the clock wherever you want users to start voting. This must be at least a few minutes before the first song you want to insert, so most stations place this command near the last stopset of the previous hour (and pair it with imaging to promote Takeover starting at the top of the next hour). Below is an example of this type of clock setup: 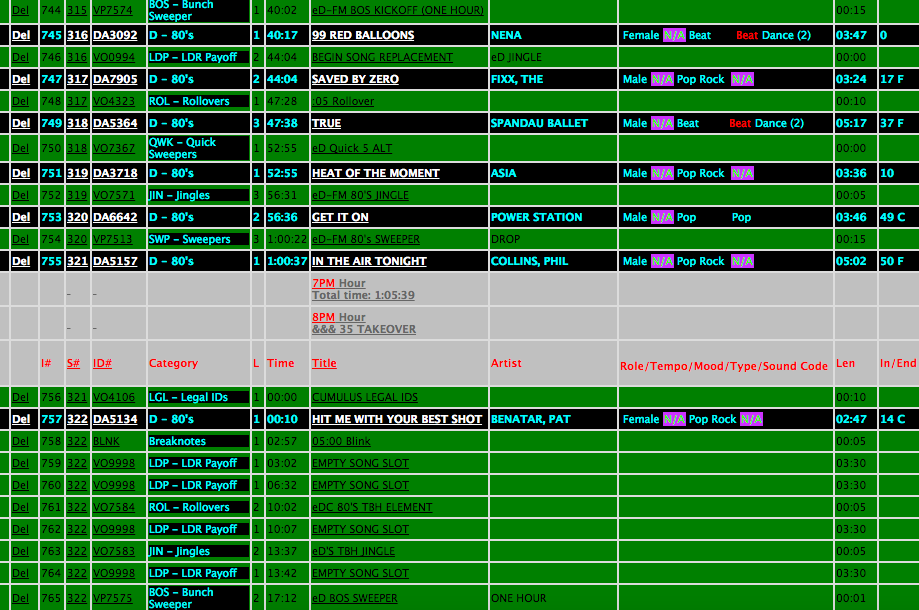 If your station uses OpX, you will place your Start Voting command right next to your Begin Song Replacement command. If you don't use OpX, you don't need that command at all.

NOTE: Many NexGen stations choose to schedule their Takeover hours directly in NexGen, rather than in GSelector, because NexGen will typically delete Empty Song Slots after a music import. For more information on executing Takeover entirely through NexGen, click here.

Everywhere you want Takeover to insert a song, you'll place your Empty Song Slot (or, for Zetta stations, you'll schedule the empty category you created in the steps above). The rest of the hour is built like a normal clock, with imaging, voicetracks, and stopsets wherever they would normally go.

It's a good idea to stack some extra Empty Song Slots at the end of the hour, in case the hour coincidentally fills with your playlist's shortest songs.

It's also possible to place scheduled songs in a Takeover hour. We'd recommend against doing this more than once or twice per hour, since it sort of defeats the purpose of Takeover and can confuse users when the #1 song in the queue is not the next one to play, but here are some good reasons stations sometimes pre-schedule songs during Takeover:

The hour after Takeover ends

When you want to turn Takeover off, place the End Song Replacement command in a clock. We typically recommend placing this at the top of the first hour AFTER Takeover, rather than at the end of the Takeover hour, to make sure it's not synced out.

If the End Song Replacement is synced out, Takeover will stay in the "on" position on your website and will be misleading to users, so that's why it's helpful to place it in the NEXT clock instead.

See the following articles for specific notes on executing Takeover in these automation systems:

You may also want to check out our articles on Takeover separation goals and Takeover playlist exports for more information on those setup steps.