With Takeover's Countdown Mode, your listeners will have the power to vote in a real-time, live countdown feature - and keep voting all the way until the #1 song plays! 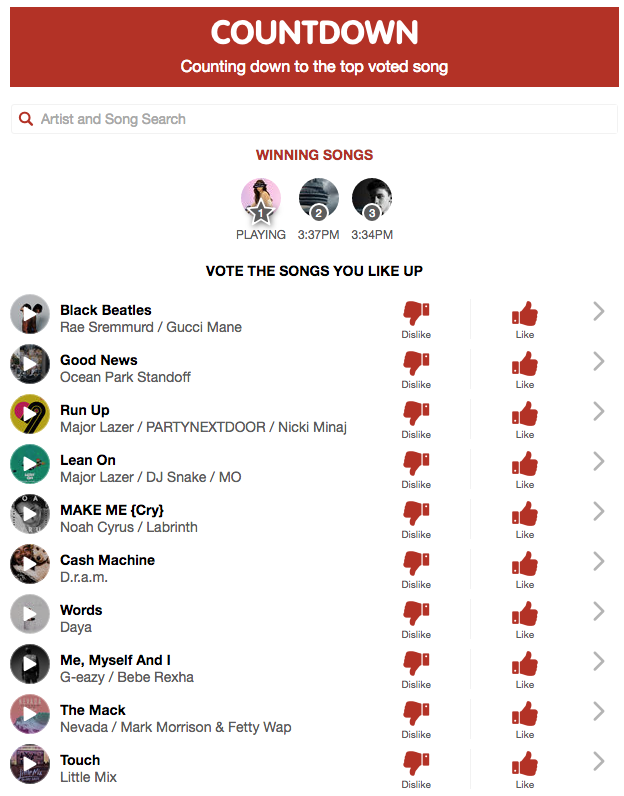 Songs that have already played in the countdown are locked in position at the top of the page, so users can see what has already played, and what they're still voting for.

On the Jock Page, presenters will see the lowest-voted song first (in the “Next” position).

How is a Takeover Countdown set up?

You'll want to provide a Takeover Countdown playlist that is at least a few songs larger than your countdown. For example, if you're playing a Top 6 countdown, we would recommend a playlist of at least 10 songs (so that there's still some suspense when they're battling it out for #1).

You can manage playlists in the Futuri Control Room under Takeover > Playlists and Songs. If you need assistance creating Takeover playlists or scheduling them to switch in advance, click here.

You'll also need to place the Countdown into a clock in your music scheduler. The Tether Countdown feature uses the same clock setup as a normal Takeover clock, and information on that can be found here.

Other more complex Takeover goals (if you have them) will automatically be ignored while Countdown mode is enabled. It will not be necessary to manually lower/disable each of these goals, if they are used during traditional Takeover shows on the station.

If you would like to set up a Takeover Countdown for your station, please contact Futuri VIP Support.

Below are an aircheck and a video that Power 95.3 in Orlando made when they launched Takeover Countdown.

8pm! Aladdin brings you the hottest countdown in the City - Orlando's Most Wanted @ 8! The hottest songs picked by YOU! Download the POWER 95.3 app now and join in @ 8pm! #POWER953